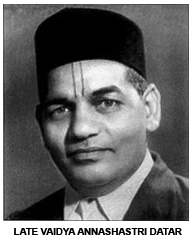 Year 1954... the bank of river Godavari in Nasik... the police came across two abandoned infant girls. The police station is close to the house of Smt. Laxmibai Datar, a philanthropic lady known for her kindheartedness. The police handed the girls over to her, who in turn trusts them in her son, Late Vaidya Annashastri Datar, a well-known Ayurved practitioner. Those able hands having followed the footsteps of his mother, not only accept the responsibility of the girls but also agreed to take up the cause of the orphans and create an institute for their welfare, on her suggestion.

The seed of a new idea was thus laid and the ANATH MAHILASHRAM was founded by Annashastri and his likeminded colleagues for the welfare of the orphans and the destitute women on Gudhi Padva, the Hindu new year day, which was 4th April 1954. Later in 1981 the name ANATH MAHILASHRAM was changed to a more positive and meaningful one, ADHARASHRAM, where everyone who needs it, gets a firm support-ADHAR in every possible way. The hands that extended help in realizing the idea of the ashram were Shri Mukundshastri Bapat, Indirabai Bapat, Founder President Dr P.S. Gupte, Smt. Indutai Khadilkar and the founder secretary Shri. P. R. aias Baba Vaidya. Shri. P. V. Upadhye supported them for this cause.

The first dwelling for the orphans and destitute was Annashastri's house. Later it was shifted to Indirabai Bapat's house. But soon had to be shifted from there, for lack of enough space. Smt. Laxmibai Datar became the adhar of the institute yet again and offered the entire one story of her residence. Very soon the requirement of the ashram outgrew this space and it was shifted to Dr. R. V. Kelkar's home at Delhi Darvaja, Nashik.

Having the need for institutions like our own is not a sign of a healthy society, yet unfortunately the need kept on growing. Even this place soon became insufficient to accommodate more than 150 inmates of Adharashram and the decision was taken to construct a building of our own, equipped with all necessary infrastructure. After many endeavors and efforts, the then managing body of the Adharashram succeeded in getting a plot on lease from Nashik Municipal Corporation. A new venture started, a long needed project of the new building. The then Union Defense Minister, Shri Yashwantrao Chavan performed the Bhoomi Pujan.

It was indeed not an easy task and the construction work was soon hampered by lack of funds. Annashastri saved the project by mortgaging his own house and also that of his brothers--an unparallel example of their total dedication to the cause.

This time the hands that came forward with help were those of Smt. Nishigandhatai Mogal, who was the then MLC and Dr. Shobhatai Bacchav, the former Minister of State of Health. They both utilized their MLC/MLA funds and contributed Rs. 10 lakh each. The remaining amount came from many generous donors. Finally the building costing Rs. 2 crores got ready to accomodate more than 150 inmates comfortably.

At the very beginning, the orphanage was the home of these orphans and women.After that she was living in the house of Indirabai Bapat.But as soon as the space became scarce, they had to relocate.Once again Lakshmibai Datar became the basis of all this and she gave a whole floor of her house for this work due to the increasing number. Soon Dr. R.V. All of them had to be accommodated in Kelkars space at Delhi Darwaza in Nashik.

In fact, such an institution is not a sign of a strong society.With great difficulty, the then executive got the land on contract from Nashik Municipal Corporation and the then Union Defense Minister Bhumi Pujan was performed by Yashwantrao Chavan.

This was not an easy task. Lack of money hampered the construction of the building.It shows a complete dedication to work.

Hundred Nishigandhatai Mughal (Member of Legislative Council) and Dr. Shobhatai Bachhav, former state health minister, donated Rs 10 lakh each from their funds at that time.Distinguished and competent hands of the society also helped in the form of donations and a building worth Rs. 2 crore was erected for 150 children.